I was 19 years old and 6 months into a new relationship. He was in a window of a puppy store marked “Sale!”. I “just wanted to look” but when I tapped on his window and this wonky-eyed, lopsided ear puppy lifted his face out of a giant bowl of food and licked the window with a fat, sloppy tongue, I was toast.

I’ve always been the person who favors the figurative underdog, and as soon as my eyes locked with Shamus’, I knew that there was no way I was going to live my life without him. My little puppy soulmate.

Tonight, a decade later, as I sit here adjusting to my first night without my constant companion of the past 10 years, I keep circling back to the fact that this weird little pup quite literally changed the course of my life.

Mike and I had no business getting a dog together after 6 months of a relationship, but we were irresponsible and wandered into that puppy store anyway. Then we were reckless and said “yes” to bringing him home that very day. I’d never had a dog. Mike and I barely knew each other. Yet here was Shamus- cosmically, forcefully- inserting himself into our lives and altering its course forever.

We dove head-first into dog parenting and loved this weird little dog fiercely. We learned so much about each other in the process. It almost broke us up a time or two in those early days, but here we are now 10 years later with another furry child and two human children added to the mix. Shamus showed us that we could figure it out together and that if we just jumped in with some faith and good intention, that things could work out. We’ve pretty much made all major life decisions together in this way ever since. Jump first and build your net on the way down. Shamus taught us how to do this and constantly showed us that, even if we made some mistakes as we built, we could still land safely. We loved it so much that we added Sasha to the mix 6 months later. Why not, right?!

I graduated college at 20. Fresh out of school with a degree that I had no desire to use, I found myself in a funk. I was living in my in-laws basement in the suburbs as we remodeled a building. A remodel that (shocker!) ran WAY over schedule and left us living in “pause” when we wanted so badly to be moving forward. I was very unhappy, unemployed, and friendless, with most of my friends either having moved back home after college or still living in the city where I SO wanted to be. I spent most days taking Shamus & Sasha to the dog park, because I felt so guilty that they had no windows to gaze out of in our basement dwelling. Watching them run free made me feel free. When we weren’t at the dog park, I was hiding in the basement watching tv on my computer and playing with my dogs- my only friends- while Mike was at work. Shamus could always find a sunny spot coming in from the tiny basement windows. It made him so happy to lie there and bask in the warmth. He didn’t care about being in the basement, as long as he could find the sun. Seeing his happy little face sleeping in the sunshine was a constant reminder to pull my head out of my rear and find the sunshine in my own life, even when things felt dark. 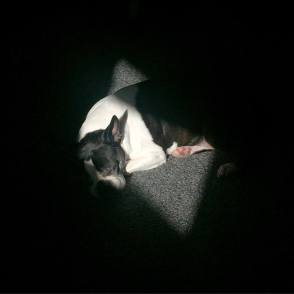 Eventually, out of desperation, I took a position managing a restaurant in the city. I felt like I finally had landed an “adult” job and enjoyed my new, exciting, sophisticated, lifestyle. The shine quickly faded though when I realized that the trade-off was an opposite schedule of Mike and long hours away from my pups. I was pulled away from the only constants in my life and it wasn’t a lifestyle that I could sustain. I was not going to work in a restaurant my whole life, but what would I do instead? What did I love to do? How did I love to spend my time?

As a child, I would occasionally say that I wanted to be a Veterinarian when I grew up. Much in the same way that I said I wanted to be a famous singer or an interior decorator- a dream from something on tv that I wasn’t actually inclined to pursue. Yet here I was at 21 with a semi-glamorous career in the swanky Chicago restaurant industry, realizing that I would rather spend my days covered in slobber and dog fur. But a Vet? No- that didn’t seem right. I wasn’t inclined to go back to school. But what else could I do with dogs if Vet was off of the table?

I scoured job postings until I found a minimum-wage, hourly, entry-level position with promise of quick promotion into a leadership role for the right person. A position playing with dogs and cleaning up poop at a dog hotel. I “poop” you not. I went to that interview and worked my magic to convince them that I was the person for them, despite my complete lack of practical dog-knowledge outside of my own pet ownership. They saw something in me and were willing to let me prove myself, so I left my cool career with a comfortable salary and, with the support of Mike, took a minimum wage job working with dogs. That was the start of a storied 7.5 year career in the animal hospitality industry that I NEVER could have predicted. Jump first and build your net the way down.

In the way that it usually does, life worked out and our remodel was finally completed. We moved into our newly finished place after 18 months of being displaced and I will never forget the tears of joy I shed when Shamus & Sasha first perched themselves in their very own sun-soaked window to look out at their new neighborhood. 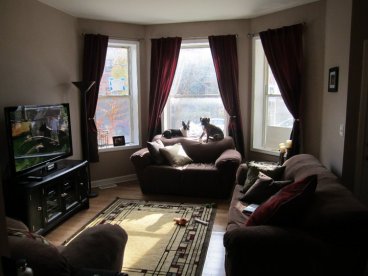 Life after that point was just one leap after another. We got engaged. We got married. We moved again, and chose a place with a big backyard for our dogs to explore. We hoped to fill that yard with kids one day to play with those dogs and our wishes came true when we had Michael and then Teddy shortly after. Shamus aged quickly after the boys were born. I saw it happening and it broke my heart, but I know he wouldn’t trade his grey furs for a second of the time we all had together. I felt like every gray fur he had was a lesson he shared with me about nurturing or caring for another creature, about myself as a mother. Lessons that I carried with me into motherhood at the expense of his perfect little puppy face.

We still commuted to work every day and spent the days together quietly in the office, just the three of us- Shamus, Sasha, and me. Eventually, I took the business knowledge I learned from that minimum-wage-dog-job-turned-almost-decade-long-career and opened my own business. For the last 6 months of Shamus’ life, we were able to spend all of our days together here at the cozy house with the cozy couches and blankets that we loved so much. Lots of comfy days and cuddling. I saw his health declining quickly and eventually realized that our days were numbered. Despite a number of attempts to save his failing body, his condition started to affect his brain and at that point there was no turning back. My little buddy’s body and mind were failing him and he needed me to take one last jump- trusting myself and trusting him that it was time to go. He fulfilled his purpose of giving me 10 years of unconditional love and important lessons and it was time for him to move on to the great beyond. I wasn’t ready, but I never would have been. He needed me to jump and figure out how to recover after he had been set free. It wasn’t about me this time, it was about him, and this was the best gift I could give Shamus to repay him for a lifetime spent giving to me. 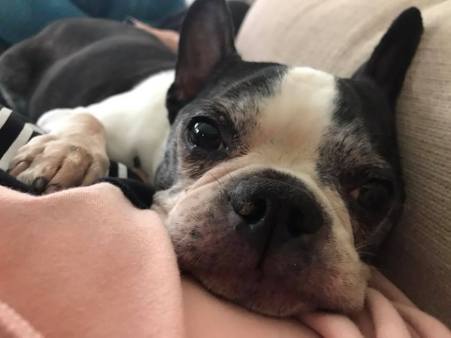 When I think back on life with Shamus, I realize that almost all of the decisions that Mike and I have made together over the span of our relationship have been made with the mindset that we learned by taking in a quirky little dog 6 months after we met. Shamus taught us to take risks and have faith in ourselves. To not be afraid of what we are capable of, especially if we do things together and with the right intentions. He taught us to take a risk on the goofy bargain dog with the wonky eyeball and to navigate the challenges of raising a puppy with a relative stranger. He taught us how to be patient and always find the sunny spot. He taught us unconditional love, blind faith, and unwavering loyalty.  Shamus changed my life, and though my heart aches tonight on my first night without him in 10 years, it is also full of love and appreciation for the love he gave and the life I have because of him.

I will love you forever, sweet boy. Thank you for teaching me to jump.

One thought on “Jump First and Build Your Net on the Way Down: The Story of the Dog Who Defined Me”